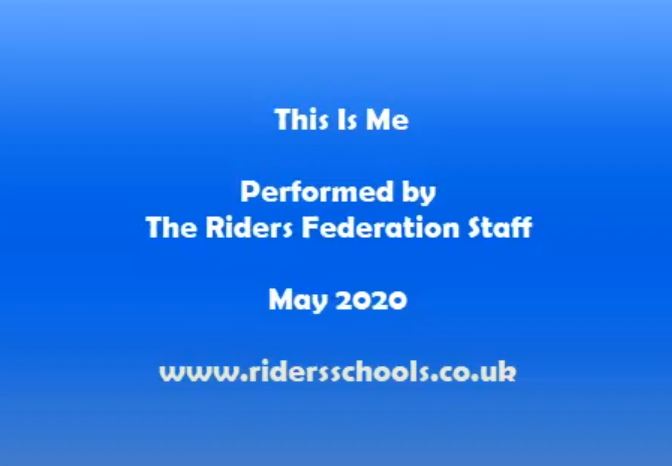 I have just made this video for school and a few people were asking how, so I thought it would make sense to write a blog post about the process.

The idea came about a few weeks ago with everyone singing on a video to a song that was important to us. This Is Me seemed an obvious choice for our school as the juniors love belting it out in singing assembly. Also, when the Junior Head of School started a year ago, it was the song I asked them to sing in her first every assembly. She was blown away with their singing so this song made sense.

First, we sent emails out asking who was interested in joining in and we collated a list of names. We then got a copy of the lyrics and divided them up between the participants. Easy. Everyone had a week or two to get the videos to me.

When recording, they had to be in landscape. There are a couple that aren’t, but they are paired up in portrait for a reason. I was going to mute the audio anyway so no singing could be heard, but sending videos of your singing to someone is quite nerve-wracking so some people muted it before sending it to me. Also, I asked everyone to sing the line before and the line after their bit.

I then knew that I needed some video editing software. I asked Twitter and had MANY suggestions including iMovie, Windows Movie Maker, Clips, Flipgrid, Splice, Final Cut, Filmora and Adobe Rush Premier. Then a couple of people reminded me about Camtasia. I had access to an iPad or a PC so I decided that I would stick to Camtasia. My version is 8.1 which came out in 2012 so there are probably much better/quicker/more powerful things around now but I stuck to what I knew. It also had another cool feature which I’ll come to later.

Camtasia works in tracks. Each one being a layer in the film. Track 1 being at the bottom.

Firstly, I added the audio to Track 1. I then decided that everyone’s videos would be in Track 2. Easy. As time went on, one of my friends, Mel, signed along to her line, and I cheekily asked her if she wanted to sing the whole song, so she did – except the chorus. Another teacher, Matt, asked if I wanted him to drum a bit of it, so we used him for the chorus. This meant that these two were in and out of the song too, this used up other tracks.

I included the school logo in the corner throughout as well as having a title page and ending page. The final video has 7 different tracks of stuff going on.

Multiple tracks help when there are more than one video playing at once as you can build up your shot and have multiple singers at once – which I did a few times.

Once someone’s audio was added to the “clip bin” and dragged onto the track, I just had to keep listening over and over until I managed to line up the audio with their singing. I could then select their video and silence it so that they mimed along. Dragging the ends of their “clip” shortened it from the beginning or end and made it easier to put in place. Camtasia 8.1 also had a crop feature so I could crop a video if they had too much background.

One or two did actually mime and it made it really hard to match up. The best ones tended to be the people who played the music really loudly and then sang/mimed along as you could match based on their music too. There was a lot of fiddling about and the song has been stuck in my head for at least 2 weeks!

I then added a few transitions where Matt and Mel faded in or out and I found that if this happened at exactly the same time, the computer struggled a bit to play the video. It was fine once exported but tricky to line up properly. By delaying one of the fades, even by a fraction of a second, it seemed to be fine. Also, the 5th line has flashing disco lights which the computer struggled with a bit. These issues are probably due to old software and didn’t show up once the video was exported.

For the chorus sections, we knew we wanted groups but we are also socially distancing. So we used Zoom for one and Facebook group call for the others. I used my laptop to hold the video chat and played the music on my phone. Camtasia’s other trick was that it is also a screen recorder so I was able to record the screen and save it as a movie to add into the final piece. One issue with this is that there is a second or two’s delay so I was singing ahead of everyone else as they were delayed. It was fine as I cropped myself out of most of the group chats so it wasn’t noticeable.

Was it a quick process? No. But I would happily do it again. I learnt quite a bit and in these times when I am at home not seeing anyone, it was a good excuse to stay in touch with so many of my colleagues! Here is the final video again, I hope you enjoy it.