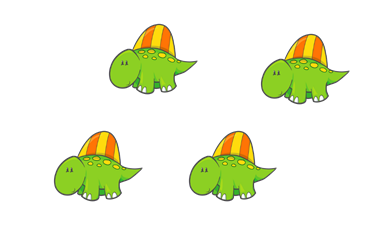 You may not have heard of subitizing, I hadn’t until approximately 18months ago but bear with me for a few minutes and I’ll explain. There is a website by Susanna Wu that explains it in much more detail than I could and backs up why it is important, so feel free to go and read that and pop back here afterward.

Still with me? Subitizing is the ability to look at a small group of objects and to instantly see how many objects there are without counting.

The research on the page above gives a clear indication that children who are able to subitize small quantities (small being up to 5 or so) generally perform better in mathematics later on. As Wu states, “…the ability to subitize 6 and 3 makes it easier to develop count-on methods when adding two groups of numbers together –  six (and count on 3)…seven, eight, nine.” There are more links and more research to back this up on Wu’s article.

I’m sure you have worked with children that try to count to 7 on their fingers and instead of knowing that there is a 5 on one hand and counting on 2 more, they count every single finger. I have felt very frustrated that children didn’t know there were 5 fingers on that hand, how can anyone not know that by the time they reach the juniors? It’s probably because they haven’t developed their subitizing skills early on. So as Maths Leader, that is something I wanted to try and change.

I was first introduced to subitizing by Gareth Metcalfe (@gareth_metcalfe), the author of I See Reasoning, amongst many other resources which can be found on his website (www.iseemaths.com)

He has created some resources ( http://www.iseemaths.com/early-number/) that help with subitizing. You simply run the Powerpoint, show the dots for a few seconds and the children tell you how many dots there are. You’ll soon find that you can flash the screen up for a fraction of a second and children can subitize what is on there. Examples are below.

He has a selection of resources with up to 6 dots. The dots sometimes vary in size and colour as you work through the files. You can go and look at Gareth’s resources and they are all available for free and I thank him for letting me use the screenshots above.

I was talking to our Early Years team and they have used the resources and I’ve also tried them on my four-year-old who is about to start school and they’ve worked well. But we were discussing where to go next. There is possibly a problem that children may become switched off if they use similar resources too often. Of course, you could make more, they’re just coloured circles after all, but we had a discussion about using pictures instead.

We came up with a list of topics that Early Years would cover and I have begun to make these resources. I have used clipart designed by the late, great Bev Evans (http://www.communication4all.co.uk/) and all of the resources I have made are linked at the bottom of this post. Wu’s article does emphasise that there are some rules when using pictures and I have tried to adhere to them as much as possible.

My thinking is that there will be 2/3 different files for each topic area but this may change as I make them. So far I have pirates, dinosaurs and construction. My to-do list includes coins, fairy tales, nature, transport, superheroes, Christmas and animals. These will all be added over the coming weeks.

To view the files in Google Drive or to download them as PPT files, click on this link. I hope you find them useful.