This half-term has been a bit different to usual. Yes there are days out and yes, the nieces have come to visit, but I have also been into school, not for planning, but for completely redesigning my classroom. This post will also be an update on the classroom tour post I shared in September.

I have a massive classroom. It echoes, it’s just huge. The plan was to redecorate and build a small office/workroom space at the back for interventions, so I held off making changes for the first term but as this work isn’t going to happen now, I could get in and change things. Also, I wanted to reflect on what has worked and what needs to be improved.

Literacy – As blogged about here, we focus on a different sentence every week. In practice this actually becomes a “sentence of the literacy unit” but that doesn’t sound as cool. So what I have done is to make a board showcasing different sentences. Some are examples of complex sentences, e.g. embedded clauses and some are taken from Alan Peat’s book. The idea is to have examples to share with the children but also to have space for children to share their own too. Example sentences will also be in their toolkits on their tables so that they can see them while they are working. 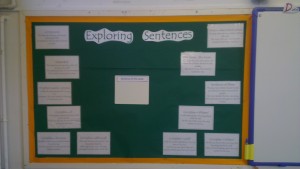 Maths – Before, I had a working wall and a whiteboard for Maths. The whiteboard didn’t really work and soon became used for other things as I needed somewhere to write notices for the children and also put up learning objectives, the date and other similar information. I love the A4 whiteboards that we have. These are not the chunky ones for using on the carpet, these are flimsy ones that snap very easily (one broke yesterday when I dropped it onto the carpet!) but they are perfect for blu-tacking to the wall and writing on. For my Maths board, these will have questions based around the maths we are doing. I try to differentiate them but the more-able will always try and answer every question anyway. there is also space available for me to stick up paper to show methods or ideas as we go along. The main thing for me is to make their toolkits on their table better so that once we have taught something in Literacy, Maths or Spellings, it comes down from the wall and into their toolkit to be replaced by new learning on the wall. 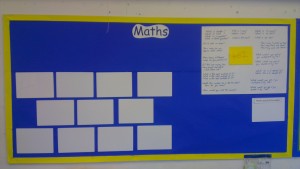 The Science wall has more whiteboards stuck to it with questions about our topic. I could print the questions and stick them on but these whiteboards are fab for quickly changing ideas. I have also left space for children to stick post-its with their own questions too. 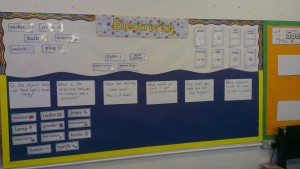 A big change in my room is that my dry-wipe whiteboard has been moved. There are various reasons it hasn’t been moved until now, but having it at the front of the room will help. The behaviour chart is also now at the front, next to me while I teach. One issue that I had is that when the children move up or down the chart, I had to break from the teaching and request that the child moved their name. This meant that the flow stopped and sometimes there could be problems if a child didn’t want to move their name…so by having it at the front, I can move names without discussion if needs be and continue with the lesson.

Another change is that I now have a board for “Building Learning Power” which is something we are trying to start in school.  It is about picking up the learning behaviours and making children aware of what they need to do to be better learners. My wife suggested making it Lego-themed and singing “Everything is awesome, everything is cool when you’re part of a team” to show how working together can achieved great results. I have a few children who want to improve, but want it on their terms. They want to work on their own and don’t want others to help. I want to break this down and make them want to learn and succeed together. So learning behaviour is going to be a big push this term.

One idea that I found in the book Inspirational Teachers, Inspirational Learners is the idea of having marbles in a jar not to represent “good” behaviour but to represent learning behaviour instead. So “Well done Timmy, you have shown great resilience today” which then leads to a marble (or for me, ping-pong ball) going into the jar. The whole class will need to work together to focus on the behaviours we are trying to learn about. I want to make this very explicit to them so that we can discuss what is meant by resilience or perseverance. It’ll be interesting as some of the children find persevering very difficult indeed at the moment!

It’s odd to think that half of the year has gone already and I’m still figuring out what to do. I am doing OK so far but I want to get better and I hope that the re-arranged classroom will give y children the chance to succeed even more than they have done so far.