I thought I’d share a quick lesson and process with you as you might find it interesting.

You know those pieces of software or websites that you know are fantastic but you never get chance to play with? I have loads of those (Voicethread and Storybird to name just two) but today I ticked one off of the list. Google Sketchup is something I’d heard about ages ago and had even seen Dai Barnes share before but yet I still hadn’t got round to playing with it. Until this week.

A random tweet from @halfpintgill caught my eye. She was discussing making Anderson shelters for World War 2 using Sketchup, this got me thinking. First, we were doing World War 2 later in the year but then I wondered if we could use it in our Greek topic. Could you draw the Parthenon or similar Greek buildings? I asked and lots of people suggested it was possible, an ex-colleague even asked his son to create a how-to guide for us! Fantastic 🙂

So I planned two sessions, one this week to play around and build a house, the simplest of simple objects and then the second session to explore Greek design a bit further. There is the chance to make it 3 or 4 weeks if needed and it really takes off.

I started by showing how to use the tools and did this for as little a time as possible. I believe very much in children exploring and then coming to tell me what they had found out. Within ten minutes we had some fantastic house designs (and some very odd ones that would probably win design awards for their ‘uniqueness’). Also around half of the class asked how much Sketchup was or ‘was it one of those free things?’. I think some will be going home to download it this evening!

So, if Google Sketchup is one of those tools you’ve put off because it looks a bit tricky, give it a go!

There may be an easier or different way, but here is what we did… 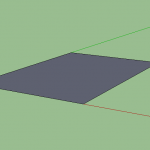 Then draw yourself a rectangle 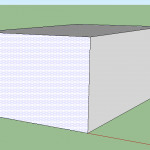 Use the Pull/Push tool to raise it into a cuboid 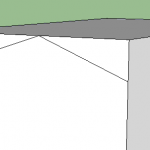 Draw some lines to indicate a roof 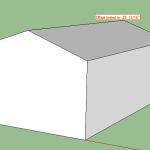 Use the Push/Pull tool to remove the ‘excess roof’