My First Story with 2CASS

I have been lucky enough to have a play with an early version of 2Create a Super Story. One of the schools here in Hampshire will be using it with their children in the next few weeks too – snow permitting!
What does 2CASS do? Er…a bit of everything really. There are a number of different writing templates. Actually writing is wrong. Story/book templates is better. There is a flip book, a scroll and other ways to display your writing learning.

To start, you choose an object and drag it into the main screen. I started with faces and a few other things and then I found the dinosaur. The 10year old boy in me took over and my ‘story’ became about a dinosaur. Obviously called Rex…I should probably point out I did this late in the evening and it is probably not my best work, yet.

So, I had my main character. But what was he going to do? If I was planning this properly, I would have discussed it with my peers or my class, but I made it up as I went along letting 2CASS dictate the story for me.

There is the option to make your characters/objects move along the screen. Perfect. Rex would go for a walk. In the rain. I dragged the rain object on, coloured it blue and voila, rain fell. To add the rain effect took about 30 seconds. 20 of these deciding which shade of blue to use!
I saw an interesting object that to me looked like a worm, so on my cover, you will see a worm wiggling across the screen. Is it important to the story? No, but who cares!

Finding a house object, I set about designing my house and background. I thought it would be good for Rex to roar as he reached the house. Now, I searched through the sound effects available and realised that the sheep noise wouldn’t make Rex very scary so I went with the lion. (My house was far too quiet for me to record myself roaring)

After about an hour of fiddling with helicopters and deleting pages and editing, I found the ‘whole page’ option. This enabled me to make the whole page shake! It could shake as Rex stomped around. Fantastic!

I had a great hour and a half playing with 2CASS. I laughed a couple of times and smiled almost constantly. It was a real pleasure to explore and set my mind off on a million things. If I showed a class my story without words, they could write the text, why is Rex unhappy? What sort of character is he? Why are people scared of him?Are people scared or is he misunderstood?

What happens in the end? Click on the link and find out yourself!

The only problem I have is that now I have to find time in my schedule to play with 2DIY and 2CASS! 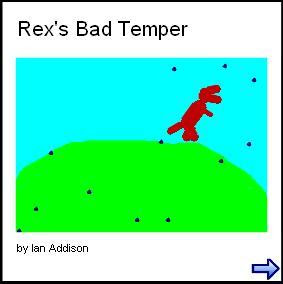