Other BETT goodness aka BETT part 2

Firstly, apologies that it has taken so long to write this. The week after BETT is always just as busy as the time when you’re there. Also, I didn’t take a laptop with me due to space constraints in the luggage (Charlie’s straighteners took priority of course).

So it’s been (over) a week since BETT and it feels like a lifetime ago. BETT is different for me than it is for the majority of other people. Most teachers will go and explore the show, look around, see what is new and maybe grab the odd freebie but for me, I go there to meet with people from Twitter and do the odd presentation or two.

Firstly, the Twitter thing. Over the last 3 BETTs I have met so many people from Twitter that this has become a massive highlight for me. If you took away all of the stands and just put us all in a room, we’d happily have the best day ever. There are so many people that I connect with on a daily basis that I see these people as friends, even more so than people I know in the real world sometimes! This sounds weird I know, but I chat to some people a few times a week at least so I do count them among my friends. In fact, the first appointment on the Thursday evening was with Dughall McCormick and we discussed the fact that we had only met in person four or five times before, yet it is always like meeting an old friend.  Many thanks to Matt Pearson for the invite to this event too 🙂

Throughout the show I met many old friends, (well I say that, but mainly they are people I met last year!) and many new ones too. The oddity for me was when someone told me that they followed me on Twitter, said hello and then walked away without me getting the chance to find out their Twitter name in return! There was even one silly (but very lovely) person who accuses me of being a Twitter celebrity, I just reminded her that I’m a normal bloke that tweets too much. And has a very understanding fiancee…

The highlight of Friday morning for me is this weird tradition that I seemed to have started a few years back. In 2010 a few us were at a loose end and had booked cheap hotels without breakfast so we discussed meeting for coffee before the show. This was where I first met Simon Widdowsden (@xannov). THen last year people asked if we were repeating the #BETTbreakfast. It had gained a hashtag so I couldn’t refuse could I? This year we followed the same tradition and all met for breakfast in a pub 10mins from Olympia. This was a great chance to almost meet people like Simon Lewis (more on him later) and Merlin John and to catch up with David Mitchell, Natty (@natty08), Dawn Hallybone, Rob Harrison, Alex Bellars, John Sutton, Gideon Williams and many more. It’s a simple idea, but I love it. Bacon and eggs, plus friends. Wonderful 🙂

I unfortunately had to leave the breakfast early as I had Google business on the Google stand. For those that attended the Google meetup before Christmas, you’ll know if something is provided by Google then you prefix it as such. We had Google wine and got a Google pen. I blame Pete Stuart (@petestuart). So, I headed to Olympia and my first bit of Google business was blagging my way in early without a trade pass (thanks to the person who helped, you know who you are) and then I met with the Google team who needed help unloading the Google boxes from the Google van. Enough of that. I spent two hours on the Google stand sharing Chromebooks and discussing how we use Google Apps in our school. What I loved was that when I started showing one person our apps approach, 4 or 5 others would gather around to watch and listen too. I have never had 2 hours fly by so quickly, it was intense and non-stop. I don’t know how the Google guys did it for 4 days! Talking to them, I don’t think they knew either! (T-shirt count = 1)

I must say that the other highlight for me at BETT is presenting. This sounds big-headed but hey, it’s my blog. Throughout the year through my various silly projects I get an amazing level of support from some incredible people. Sometimes this means discounted or even free software, sometimes they help with sponsorship or an event or sometimes they make badges for me. (This blog post is due later). So I see BETT as a time where I can do a little bit in return. If I can do a presentation about Class PET for Scholastic and have 10 more people come to the stand, then that is a good thing. My first duty was a Teachmeet Takeover for Rising Stars. I was sharing this with Bev Evans and I discussed some free stuff to use in school. We had a crowd of around 20 people and some stuck around after to talk to the team at Rising Stars, which is great. Andrea has supported many things we’ve done so it’s always a pleasure to see her and help whenever I can!

So Friday was the day when (in the words of Bev) I turned into a software/corporate tart. After my TMTakeover I headed to BrainPOP where I swapped tshirts for an hour or so sharing how we use BrainPOP in school. I love the BrainPOP team and any time on their stand is great fun. Charlie spent a lot of her two days on there too in fact. So I swapped t-shirts (tshirt count = 2) and started talking to some people. This is hard because people assume you are trying to sell to them, which I guess in a way, I sort-of am, but I am just trying to share a great product that our children adore.

After a short time with BrainPOP it was the first of a few Class Pet demonstrations for Chris on Scholastic. Chris is another person who has helped me in loads of ways such as taking photos at the first TM Hants right through to being the first sponsor of TM Bett2012.  This is a great product that really helps with assessing maths in the classroom. The children enjoy it and one today even asked me when do they next get to go on there because they love it so much!

I also squeezed in a presentation for 2Simple about how we use Purple Mash (tshirt count = 3) and answered questions too. Out of everything, Purple Mash is the one product that I would (and did) buy and recommend for any primary school. The others I’ve mentioned are great but Mash just about edges them as it covers so much across the whole school. So I will happily discuss it with an audience and present on it whenever I am asked to.

Throughout Friday I kept having this nagging feeling that I wasn’t seeing the BETT show at all. I spent my whole time going between 4 or 5 stands, visiting people I knew, but I was fairly happy. Mainly because I knew Oliver Quinlan was exploring and snapping pictures for us all to look at later!

The evening brought the main event for me, Teachmeet. This was put together even-more-last-minute than last year and yet we felt calmer and more organised. Maybe it’s because Drew, Ian and I had sorted it last time around, maybe it was because we weren’t presenting. That honour went to Miles Berry and Dawn Hallybone.

I’m going to forget people but MASSIVE thanks to Alex Bellars, Phil and Nicky Allman, Sarah Neild, Tim Rylands, Dan Bowen, @natty08, @mrswaite, Pete Stuart, @grumbledook, Dawn Hallybone and the other 10 or so people that helped convert the Apex room from 250 chairs in rows to 25 tables of 10 in 15 minutes. Truly incredible and without you guys, it could have been a bit different!

As we weren’t presenting, we were able to flit about solving minor things and making the evening run smoothly and I know I am biased, but again…I don’t care…I felt that everything about the evening was perfect. There was a mix of primary and secondary (maybe more weighted towards primary, but last year was very secondary focussed) and there were lots of people that had never been to a Teachmeet before and also some that had never presented before! There were even some amazing trainee teachers that stood up and presented too. Kudos to them. They got a standing ovation from Dughall, Tim and Bill Lord. Not bad for your first Teachmeet is it?

One benefit of organising the Teachmeet is the ability to influence it a bit. So as the evening was drawing to a close I asked Dawn and Miles to invite three teachers up to present. These teachers (Claire, Cherise and Julie) have been planning online for weeks yet Cherise hadn’t met the other two until the evening of Teachmeet. They were nervous about presenting and sharing their project and only ‘volunteered’ because I bullied them into it. I know they had been worried all evening so I asked for them to go on last. The thought of building up to presenting and then not being chosen would be a bit too much for them (particularly Cherise!!). So they presented and they were fab. The evening was amazing and I felt very happy with it all. So to Pizza…one downside of having so many different tshirts is that both Charlie and I ended the day with BrainPOP tshirts on so we looked like we had decided to wear matching outfits. Obviously this wasn’t the case! 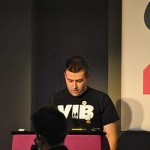 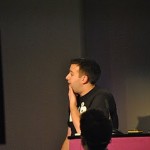 Overall I thought that BETT was a great experience and I want to thank everyone that I spoke to, shared with and met up with. You guys truly make it a wonderful experience 🙂 Roll on next year!

For a round-up of other BETT posts, take a look here.