Google Apps – one week in #GCT

So we launched our VLE cloudy thing this week and I thought I had better write about what I’ve done and how we’ve done it.

The proper how-to bit will come later, I know that sounds silly but I want to document it properly to give to other schools who want to start their Google Apps setup so that isn’t ready yet. I’ve been too busy playing (and feeling ill) to write down the boring technical bits.

But I will give a quick run through of setting up. First I got some domain hosting, being called St John the Baptist meant that we were limited on our choice of web name so I settled for St Johns Apps which seemed to be fine. Google apps plus others in one place. You then run through the Google Apps setup, prove you’re a real school and voila…Google Apps for Education. It starts as this behemoth with Docs, sites, Reader, Video, Chat, Groups…what do you want? What do you turn off? I start with the safe ones like doc, mail, sites and calendar. The idea is that  I’ll gradually turn others on as I get round to it and as I’ve played with them a bit more. The children see a site that looks like this when they log in.

Not very inspiring at all. I wanted something more icon-y and colourful. I spoke to the very helpful Mark Allen (@edintheclouds) and he sent me the icons which helped a lot. So I made the slightly better: 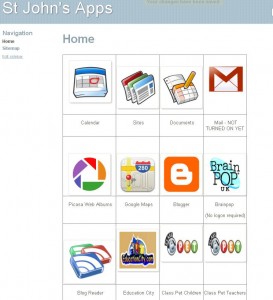 This is the third version we have had in 4 days. I added Education City and Google Reader yesterday and Classpet this evening. The vision is that I will keep adding tools and will maybe categorise them soon too if it gets too much. Ed City and Brainpop are auto-logins as the children need to login before they see this page. I will add Purple Mash and J2E on here soon too. The next step is putting tools like Zooburst, Photopeach, Voki etc on here as well. I think.

So, Monday started with showing the head teacher what it was going to do. I am very lucky in that I have a head teacher who will let me try things as long as he knows a little bit about it. He didn’t want to know any of the technical bits and trusts me with getting it right, so there wasn’t much convincing. I showed him how to log in and a bit of the calendar. He didn’t need to see more and was impressed that this was free. We’re currently paying just under £1,000 for a VLE and not using it yet this Google one does so much more for the price of a web address (about £6 a year)

The next step was to launch it with children. Now the sensible considered approach would be to try something with one class for a few weeks and see how they get on. Then maybe extend this trial to other classes and so on. I am not usually sensible and considered. So this week we launched it to 180 children across 6 classes in Key Stage 2 (7-11year olds).

There is a sort-of plan to this madness. Year 3-4 will be making websites based on their local area. This will cover photos, videos, sound and information about the village and the facilities available. While planning this, I thought that maybe Year 5-6 could do a similar thing on their topic, the human body.

Now I am not advocating teaching the same stuff to the 4 year groups at once, but it seemed like a sensible thing to do in this case. Along the way we’d look at other tools too and the children could explore and see what they come up with. For example using google spreadsheets to measure and collect data.

The first session involved calendar though. This was because it was nice and simple but also because lesson 1 involved typing in two Captcha codes, something the children did find tricky. However, we logged on as a whole class in anywhere from 8 to 15 minutes. Not bad for two captcha codes and a new login box. I emphasised working together, checking the Captcha text before pressing OK and generally it went well.

Then we played with calendar. I say ‘played’ because we really did mess about with it. From adding birthdays to sport fixtures to UK holidays to phases of the moon. Then I shared calendars and they loved it. They liked being able to see their friend’s birthdays. Simple, but effective.

This was generally enough for the year 3-4 children to deal with in one lesson. One child loved it so much they said ‘Oh my god, calendars rock’, which I liked!

Year 5-6 managed to have a bit of a play with Google Sites. This was a bit trickier and I think I was too keen to let them make a site without planning. They were happy sharing their site, but were too busy finding information to think about the referencing/copyright aspect. We will cover that more next week. They also found it difficult to work with a number of windows open at once and to know where to find information. We have covered this before, but I think it was a lot to do at once. They definitely got better as the lesson went on though.

We have found a few other uses for the cloud already. We have put some digital e-books into a shared document folder, the children can all see these but not edit them. This means they have a constant library available to them.

My head teacher uploaded a powerpoint and converted it to a Google presentation (well, I did that for him). He then went and presented at a head’s meeting. When asked if he needed to plug his memory stick in, he simply said, “I don’t need to, we have the cloud”. He then had to answer loads of questions about what it was, how much it cost and what it could do…I know that will lead to other schools contacting us to set them up too, but I’ll ignore that for now.

My favourite parts of the week have been the children though. We launched a pupil newsletter recently and this consisted of three girls using Publisher in school and trying to email stuff from home to school and vice versa. They would get 15minutes one lunchtime a week to work on it. Today they moved this newspaper to google docs and all worked on it together. This will then go live and be emailed to all students when it is ready and I will download it as a doc and embed it on the blog for the public to see.

Another highlight was a conversation with a boy this morning. He was talking to me and he asked me if I’d heard about ‘the cloud’. He said you could save work there and anyone could access it. His face was a picture when I said “heard about it? you’re going to be using it in an hour’s time”. I think he was impressed.

So what have been the downsides?

Mail still doesn’t work. I think this is me getting some settings wrong. I have checked them again and if it’s still not working tomorrow I’ll speak to our hosting company to get them sorted.

I mentioned moving to an online diary. Not instead of a paper one because I know people hold that dear to their heart, but as a backup. It could replace a paper agenda we have in school but I know this will be a hard fight to win and I am happy to let staff use the cloud thing in the way they want to. We will definitely be putting dates on for the children though as they seem so keen to use it.

And…er…that’s it so far. We have yet to mention it to parents, I am very much a believer of doing something and then telling people about it rather than telling parents what you are going to do. We will have staff training in a few weeks time and will run a parent session after Easter.