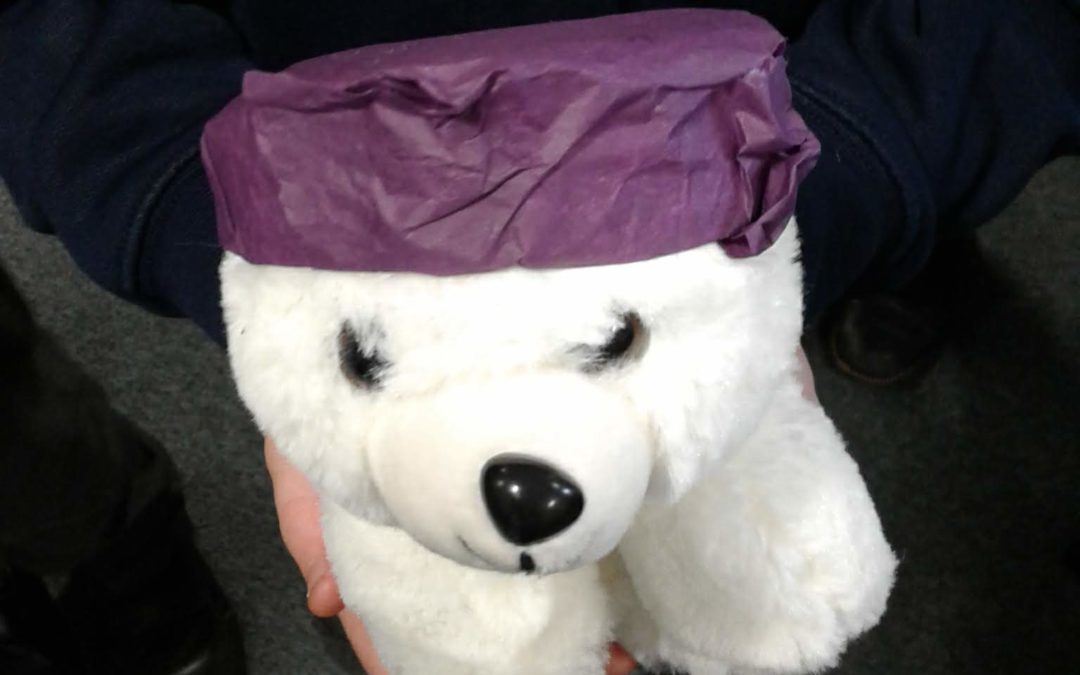 On Friday, the last day of term, we decided to skip the usual colouring in and DVD activities for something a bit different and my class took part in Taskmaster morning.

For an overview, go check out James’s Blog here and come back when you’re done. The long and short of it is that there is an amazing show on Dave called Taskmaster where Greg Davies and Alex Horne set tasks for celebrities to complete. The Taskmaster then judges each of their efforts and awards points as appropriate. Go and watch it if you haven’t already, it is amazing.

Anyway…Taskmaster Day. Alex Horne has created a video (https://vimeo.com/303585835 password:) to be used as the starting point for the day and it includes the instructions that you need to begin.

Firstly, we watched the video twice, talked about what it might be all about, clarified the rules (if you get stuff out, tidy it up!) and then we began.

Task 1: Come up with a team name that contains Miss Smith‘s favourite word. Now, Miss Smith is a Y4 teacher and most of my class don’t know her. She is in the room next door but they had no idea what her favourite word was (bubbles…obviously) so the children had 5 minutes to come up with suggestions and then she judged the best ones later on. Silly, but good to see them being creative.

Task 2: The long game. Find out how old Mr Winterman is. In days. He was on playground duty yesterday so he was inundated with children asking either how old he was or when he was born. They then came back in and tried to work out the problem using tablets etc. He is 26 years old so some did 365×26 on calculators and others tried to use his date of birth and Google to find out. One did put “How old is Mr Winterman” into Google and it didn’t work, but they learnt quickly enough. The winner was just 6 days out.

Task 3: Make the longest paper chain you can. Each new link must be a different to the previous one. You have 15minutes. This was a great way for them to work together. In the end, the longest three only had about 5cm difference.

Task 4: Make a hat for one of the class animals. You may use scrap paper or tissue paper. You have 10minutes. In each class, we have 4 animals linked to our school values and . I am class so we also have a chameleon toy too. They then spent their 10minutes designing and making hats as you can see below. The team with the chameleon ran out of time so yes, that is just a piece of paper balanced on his head!

After play, we went for the technical tasks and the iPads came out.

Task 5: Use the Chatterkid app to make something tell a Christmas joke. The one that Berry (the class LSA) finds the funniest, wins. This is a great app where you take a photo, draw a mouth and record audio. The children then used this to tell Christmas jokes. Unfortunately, it turns out most don’t have a sense of so they just said silly things rather than actual jokes. Next time, provide the jokes.

Task 6: Use VidReverse to film something that would look cool if reversed. I showed some examples of Miss Smith throwing a towel so in reverse it looked like she was summoning it into her hands. They then had a play and it took a bit of encouragement but they soon got the hang of it. The best ones are below.

After all of this, we added up the scores and announced the winners. They didn’t get a prize and many thanked me for an amazing morning. One of the other teachers came in at lunch and said they were “all Christmas-ed out” but my class were buzzing and wanted more. Miss Smith‘s class used the challenges too and the reaction in her class was very similar. It was fantastic to see the children interact with each other and attempt difficult challenges. A great way to end the term!

You can also find some child-friendly tasks here: https://www.youtube.com/playlist?list=PLaNnwX-UIQEJGgdYm8U3KILtSkW8pPPk7